Port Moresby, situated on a scenic harbour is the gateway to your PNG adventure holiday. The city got its name from Captain John Moresby who was the first European visitor to arrive in 1873. As the largest city (pop. approx 320,000), capital and main commercial centre of Papua New Guinea, Port Moresby is also the central meeting place for people from the various provinces, who come to town to purchase their supplies and exchange news items.

Due to domestic flight schedules an overnight stopover in Port Moresby may be necessary. For this we recommend The Gateway Hotel or the Holiday Inn. For those wanting to dive and explore the area surrounding Port Moresby, Loloata Island is located out in Bootless Bay, just a 15 minute car ride followed by a 10 minute water taxi transfer from Port Moresby International Airport. 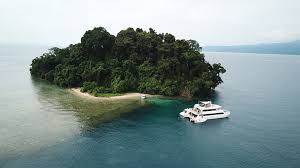